Levis – How we impressed them

After 28 years Levis have parted company with BBH and every ad agency in town was in the race to get on the hottest pitch list in town. 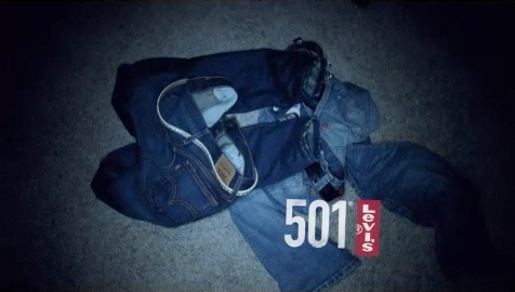 There are few brands as iconic and as desirable to work on. So instead of sending in the usual creds we at Creative Orchestra wanted to do something different and imaginative. After all, different is what brands need these days.

After all, if your mission is to be one of the best creative ad agencies around you need to show what you can do. And how you think differently.

The brief was “impress Andrea” (Levi’s UK Marketing Director). We decided to take something boring and make it interesting. If you can do that on something as dull as a coat hanger, imagine what you can do with jeans.

Our large team of creatives all set about creating the most imaginative coat hangers ever. Each came with a special tag with a story of how it linked to Levis.

The best 18 ideas were then presented in an amazing wardrobe, covered in over 1000 images from the history of Levi ads. And then hand delivered to their offices in central London.

We followed it up with a collection of postcards of the hangers which we sent to other key Levi’s staff.

The result? They were impressed. Very impressed. The wardrobe was a talking point and seems we did the most creative mailer of all the agencies. Hard work pays off.

Or check out our disruptive innovation division, The Garage, for businesses it sits in that space between marketing consultancy and management consultancy – think Steve Jobs kind of thinking. http://www.co-garage.com/

So here are some of the coat hangers we made and the inventive stories behind them (note, each story has one element of truth in it).

Józef Gosławsk was an accountant for the Polish Levi’s factory.

In 1987, while riding a horse, he was knocked off by a tree branch and suffered a minor head injury. The following day he discovered he had abilities he didn’t have before. He could add up complex numbers, memorize 1000 pages of the bible, play the piano and was suddenly artistic.  Despite years of study, scientists couldn’t discover the cause.

Józef went to study at the Warsaw Royal Academy of Fine Arts and become one of Poland’s greatest sculptors.

His 1996 piece “Secret Wardrobe” was inspired by the book The Lion, The Witch & The Wardrobe. He used a coat hanger as the basis of what he described as “a post modernistic twist on a child’s fairy story”.

In 1999 it won him the Laszczka Prize for modernism.

The ‘Hangercaster’ was first invented by Herman Strauss in 1873 in California. Herman was a German immigrant and cousin of Levi Strauss.

It was a popular instrument with farmers, dockers, lumberjacks and general workers as it could be easily carried. It was also known as a ‘cotton harp’ or a ‘docker’s harp’.

Groups of farmers would often be heard singing along to a Hangercaster to such classic songs as Heartland, Little Pink House and the original folk song, Born in the USA (later covered by Bruce Spingsteen).

In 1937 the Hangercaster Dance Orchestra, featuring 12 players, had a string of hits including the original versions of Whole Lotta Love (later covered by Led Zeppelin) and  Boogie Nights (which became the soundtrack of Paul Thomas Anderson’s movie in 1997).

Usually strung with 6 strings, it has also been adapted to a 4 string version and a 12 string version. In Africa it is often found with 5 strings, and 7 in Brazil. In some parts of Spain they were highly decorated and strung with gut rather than wire to sound more like flamenco guitars.

Only one original Hangercaster made by Herman Strauss still exists and is kept in the Chicago Museum of Coat Hangers. Despite a number of variations, manufacturing was stopped in 1907 as guitars became cheaper and more popular. The instrument saw a brief revival during the American depression of the 20s through the 30’s and early 40’s but was officially declared extinct in 1945.

In the 1940s Leo Fender, the father of the electric guitar, produced an electric version of the Hangercaster called the ‘Hangocaster’. It was not a success, only 12 were ever sold, the rest ended up in his wardrobe. But it was the inspiration for his guitars that he built later, most popular being the Stratocaster and the Telecaster.

When Levi Strauss first launched his legendary jeans it was through the network of supplying music to Hangercaster players that Levi first used to market the jeans. This allowed him to reach a massive audience of workers all over the USA and into South America. Each piece of music carried a 2 inch by 6 inch advert at the bottom which read, “Trouser that’ll live for ever, that’ll be a pair of Levi’s.”

Levi liked the fact ‘live’ was an anagram of his name. 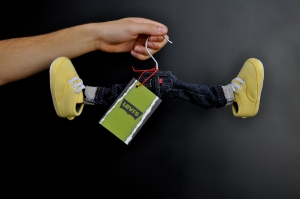 In 1984 a worker at Levi’s named Colin Stevens pitched an idea about a product designed to coincide with his need to look ‘the business’ when out and about on the town.

This being the 1980s the favoured look was the drainpipe jean. However, Colin was also an enthusiastic break-dance. He felt that his beloved drain pipes were restricting his dancing.

With the touch of a button located on the trouser, these jeans can go from skinny to baggy in a matter of seconds.

Two jeans for the price of one! 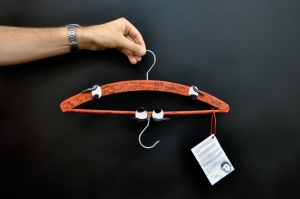 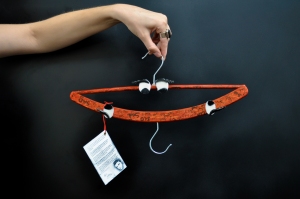 It is not well know that Aaron Presley, who later adopted the name Elvis, was the son of a jean working who worked in the Levis Strauss factory in Memphis. From a young age Aaron would go with his mother to the factory.

The women there all made clothes for him from jean off-cuts and soon Aaron was nicknamed ‘Little Levi’.

Charles Presley, Aaron’s uncle, was badly dyslexic. One day he wrote ‘Little Levi’ on his first schoolbook and by mistake wrote ‘Little Elvis’ (which is an anagram of Levis). The name stuck.

Elvis became one of Rock’n’Roll’s legends but like so many stars was very moody. His stage assistants never knew if he was in a good mood or bad.

One day George Shimmer, Elvis’ costume assistant, made a coat hanger that could be happy or sad. This he’d hang outside Elvis’ dressing room to warn others of his moods.

For 20 years Elvis never once noticed it.

When the Berlin Wall came down in 1989 it opened the door for Western brands to sell to the Eastern block. But for decades black market traders have been selling Levi’s. Scarcity created a great demand.

However, at one point in the 70’s the Russian government made it a serious crime to sell jeans as they were frowned upon by Soviet officials as “symbols of decadence and Western imperialism”, to quote Yuri Vladimirovich Andropov, head of the KGB from 1967-82.

The punishment was severe, even being shot or sent to Siberia, so black market traders had to use subtle ways to advertise they had jeans for sale.

Many used a coat hanger decorated by a child that would be hung in windows. These were originally made as part of Maslyanitsa, a festival where Russians wear funny masks and costumes, made pancakes and took ordinary objects like coat hangers and decorated them.

With none the less finest in Mine Illumination!!

If your fortunes will be found in the gold rush, you can bet it was mined with the assistance of this illuminating device. Easily worn leaving your hands free. Sling it over your shoulder; or loop it on your jean pockets. 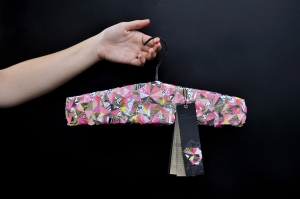 One of Spain’s original pop artists, Ana Martorell, was famous for a series of artworks called ‘REVERSE’ (the other side of fashion) that first exhibited in the Dali Gallery in 1967.

Ana had trained under both Picasso and Dali.

She took fashion ads from magazine, cut them up and stuck them to coat hangers. But instead of using the ad images she used the image on the back.

­­Her work was a poke at the fashion industry and was not popular with big fashion brands as she reversed the brand’s names to title each artwork. PAG, GUCCI, ICCUG, SIVEL and SSOB all resulted in threatened court cases.

However, due to a freak accident Ana was run over by a bull and died before any cases made it to court.

This is the only surviving exhibit from the original collection.

This is a scene from the famous Greek children’s book series, ‘The Adventures of Levi the Zebra‘.

Levi is one of the most popular characters in Greece and was created by Sonja Loukoumaki, who claims to be  a distant relative of Levi Strauss.

She first fell in love with a Zebra in Athens Zoo at the age of 10.

She has published over 30 books which have been translated into 22 languages and is currently being made into an animated TV series.

For every book published she mounts an illustration in a wooden coat hanger which is then auctioned off to support children’s charities in Greece.

The Strauss family, famous for the Levi’s jean brand, originally came from a village called Ebensee, which was once in Germany but is now in the Austrian region of Salzkammergut. The village was famous for its cotton mills.

The Strauss family looked after their workers and were the first fabric millers to give them free healthcare.

During the Great Plague of 1665, which swept across Europe, many villages saw up to half their villages die. Except Ebensee, where not one single person was ill. Many attribute this to the care given to the villagers by the Strauss family.

Ebensee became a Mecca for religious groups and every year they celebrate Gloecklerlaufen.

This festival features a ritual in which the men of the community wear elaborate denim outfits (a tribute to the Strauss family) and don giant tissue-paper head-dresses illuminated from within by lanterns. 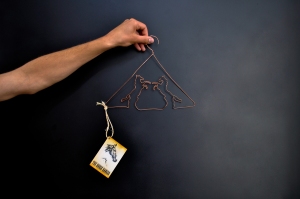 The Horse Hanger was made for Enzo Ferrari (founder of the sports and racing car company) especially to hang his Levi’s 501s on. It was hand-made by one of Italy’s top jewellers, Benito Maranello.

After his death it was donated to the Turin Coat Hanger Museum (Turin Museo Gruccia Stampella).

Year of the Tiger – Ana

When Levi’s first sold jeans in China their strap-line ‘FREEDOM TO MOVE’ was mistranslated into  ‘FREE THE TIGER WITHIN YOU’.

Whatever sits atop Cliff-Hanger Mountain!

…all they found was a pair of jeans… 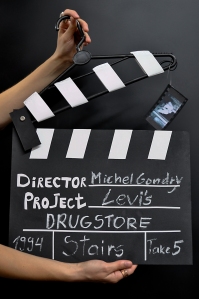 Michel Gondry (born May 8, 1963) is a French film, commercial and music video director and an Academy Award-winning screenwriter.

He is noted for his inventive visual style and manipulation of mise en scène.

Drugstore holds the Guinness Book of Records record for “Most awards won by a TV commercial”.

It was during the filing of Drugstore that Herman Schintz, a second assistant, created this fun clapperboard.

Gondry was not amused and fired him. 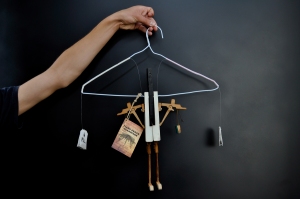 For many years seen as the keepers of peace in the kingdom.

Piano Peace Guardians have been genetically grown from simple tea pickers in the B# Flat Dynasty to peace warriors.

They are today fed on only the best high quality denim from Levi’s to keep them in a long lasting mood of joy and pride.

Postcard mailer we sent to the US team. 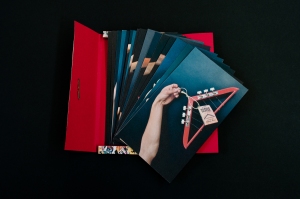 Grass box with a copy of our COW Magazine. 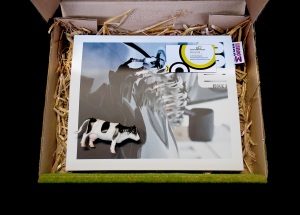 The wardrobe with over 1000 images on. 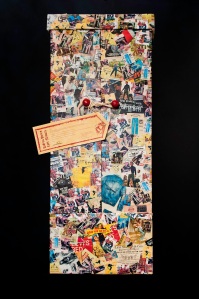 However, feel free to publish images providing you credit us and don’t say nasty things.